Party for the Grown and Sexy – You, Me and Everyone We Know 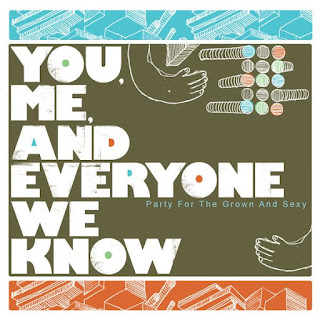 Live Blog
Livin' th' Dream - wow this is poppy pop punk. Say Anything type pop punk. I love it. Great opening song.
I'd Be More Interested If You Were Already Spoken For - More poppy emo pop punk. Reminds of All Time Low and Say Anything together almost. I think All Time Low is better though. But this is pretty good. "Cross yyyyooooour fingerssssss and hope he doesn't wait up for you"
Do it Again! You're Not Making Me Want to Touch You! - "They're shouting "have another!" ". His voice here sounds like Panic and the Disco. I love it. "Shut Up and Dance!!". Great faux-solo. More happy/ angsty lyrics. perfect.
The Press War - His voice here almost sounds like old Fall Out Boy too. Idk, it's like a mash up of all the good parts of pop punk. "there's just one thing he'll forget to mention/ they're taking sides as you find your ride / dry your tears, at least you'll leave with your pride"

Dirty Laundry - Ok, these lyrics aren't that different from Circa Survive's. But god damn,  its so much better. The instruments are not as good, but the songs are better. Because I believe this guy. I know he is honest and really feeling what he sings. "Things are gonna be different now you see/ And add to all this dirty laundry you left me"
...Because I Spit Hot Fire - The screams half way through sound like Brand New. Probably the worst song here, but it's still not too bad.

The Rent is Due - Nice guitar riff at the beginning. His voice is great too.
One of the best choruses of the CD: "So make it a point tosay you miss me / and tell all of your friends / of the boy from which your accent comes / oh wont you hold it, against me / for knowing the words/ what you say to make your heartbeat stop". And the double bass hits during it. Oh man. pop punk heaven. Then the guitar solo build up around 2:30. Then the gang vocals during the chorus at the end. Oh GOD!

Carolina Heat - Jesus I love this song. The generic slow song at the end of the song, but it's done soo well. And then it builds up perfectly. This song is sad. and emo.


You just convinced me to write this
it's for the greater good
cos i'd rather be great than good
they say the carolina heat
isnt something that keeping a cool head can beat
but don't discount their winter winds
and all the cold shoulders that the slightest draft lets in
but with empty stomachs and hungry eyes
our only choice was to swallow pride
but i guess you just ate better than the rest
Man I love this song.
Write Up
Wow. Just wow. Sometimes pop punk just really surprises me. I didn't know that I could really be impressed anymore by anyone since I already have Fall Out Boy, Reliant k and blink 182. Yet in the past year, I've picked up so many amazing pop punk acts: Four Year Strong, All Time Low, The Wonder Years, and Motion City Soundtrack. And now, I've found another. YMAEWK has taken their own spin on pop punk and even though it's not too different from everyone else's take on it, they manage to nail it. They're lyrics have a certain cleverness too them, making them fun and different, but still easy to figure out. They're instrumentation is varied enough but it's not really the highlight of the album.
And Carolina Heat is just a fantastic song. Really is.
Would I Listen Again?
DUH
Posted by cwew at 9:49 PM