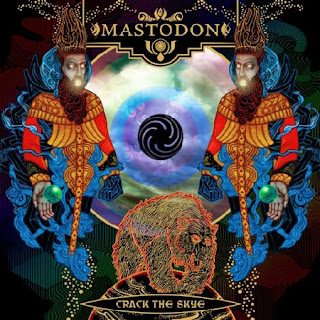 Why I Chose It
It's one of those albums I think I'm suppose to know....
Live Blog
Oblivion - Slow start, changed to a weird faster riff. Palm muting galore. Haven't heard that in a while. His voice sounds like Godsmack's. WTF a guitar solo? haven't heard one of those for a while. it's good too.
Divinations - wow, the guitar intro is pretty sick. and I like this drumming. weird distorted riff at 2:19ish is cool. I like this solo coming on too.
Quintessence - the lyrics aren't too intricate or anything, but I like them. They have a cool brevity to them. The drumming highlights key parts in the song. I like the cowbell. I like the breakdown around 4:45. It's well disguised too.

The Czar - This 10 minutes better be awesome. I believe it can be, for Between the Buried and Me do that all the time. Slow burner, like the piano at the end. Good song. Didn't get boring.
Ghost of Karelia - It's not boring. It's just not remarkable, at least on first listen. Though I think somewhere I read, "It's a grower and not a shower".
Crack the Skye - vocals are different here. weird vocal effects around 3:54. I like them.
The Last Baron - 13 minute epic, here we go. Starts slower. picks up at 4 minutes. Cool guitar riff at 7:00. "I guess they would say that we could set this world ablaze". 9:27 has a acoustic guitar harmonize with the guitars. I like it. The solo at 11:27 is also pretty cool. It seems to pick up energy for the big finish.
Write Up
Um, it was good. It was sludge metal. I liked it. The guitars were pretty impressive. And the drumming is superb. It's just....not all the impressive to me. I'm sure the lyrics are good. And I'm sure if I listened more, I would like more stuff.
I just...was sorta bored through the whole thing.
Would I Listen Again?
Probably not.
Posted by cwew at 9:47 PM