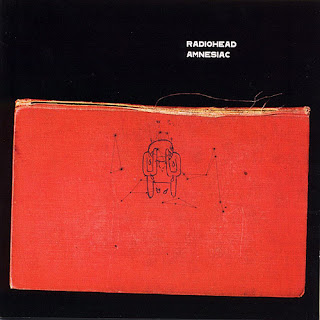 Why I Chose It
I like Kid A, Ok Computer and In Rainbows. I wanted to get another Radiohead album under my belt and I've heard this is their best. It's supposedly takes the best parts of OK Computer and Kid A. We'll see.
Live Blog Section
Packt like Sardines in a Crushd Tin Box - Calm intro. I can hear the Kid A influence here. I like the way the electronica bounces from one side to another. "Get off our case". Like the outro too. This could be confused "Everything in It's right Place". It's very similar because of how it opens the album.

Pyramid Song- Piano intro. It's okay. Hopefully it builds into something. Thom Yorke's signature vocals are at it again. Irregular drums at 2:10. Intentional, obviously. Intriguing. "nothing to fear." Nice ending at 4:10ish. Another slow song.
Pulk/Pull Revolving Doors- Like the intro. Weird vocals at :19. I like this beat. I like the minimalist lyrics. It almost sounds like the Gladys from portal. Really cool pause at 2:16. Best track so far.
You and Whose Army? - More Thom Yorke vocals. standard repeating of the same lines over and over. Like the pickup at 1:55.
I Might Be Wrong- Like the opening guitar riff. Nice to see Greenwood finally. Not annoying vocals either. "Have yourself a good time, it's nothing at all". Weird background guitar pinched harmonics(or extreme palm muting) is cool around 3:30. Like the breakdown and ending electronica.
Knives Out- A much more traditional sounding Radiohead song. A song about cannibalism? "knives out" is a great phrase.
Morning Bell/ Amnesiac-  a much happier feel than normal. like the organ at 2:55. subtly to the right.
Dollars and Cents - ok. its starting to sound the same as the rest of the album. I understand it's different, but Yorke has done this whole crooning thing for a while. Hoooooooooooold noooooooote. This song has much more lyrics than the other songs, thankfully. I like the rounds their doing at the end.
Hunting Bears - I like the opening guitars. okay, i guess it's an instrumental. still like it.
Like Spinning Plates - I've had experience with this one. good ol' Radon. I really like this song. The backwards concept is really cool.
Life In a Glass House- Piano is nice. The flute and sax really make this feel different. Almost sad. But all this just sounds like a march. Especially when the drums just have a low cymbal crash with the piano. Ends nicely though. Good ending song. Especially the final despair of "someone's listening in". It almost makes the whole CD feel like a waste, which is intentional and desired.
Write Up Portion
Alright, I like Kid A. I like the first couple of songs on OK Computer. I also really like In Rainbows. However. In regards to this album. I don't really know how I feel. Although, Radiohead is one of those bands that are incomplete without knowing the lyrics. The lyrics give the album power and meaning. Without it, I can tell you, it's kinda boring. Yes, I May Be Wrong's guitar riff is catchy. And Like Spinning Plates is a really cool concept. But the majority of the album is just slow melodic electronica with Thom Yorke siiiiiingiiiinng something or another. I under that where he holds the notes probably has some significance. Again, I'm at a handicap because I don't know the lyrics.
Maybe I just don't get Radiohead. I mean, I can't really see this being played at a concert and having it be any fun. Bring Me the Horizon is fun. Fun all around. Maybe that's what I require. Radiohead isn't fun. National Anthem is fun. I May Be Wrong is fun. 15 step is fun. Amnesiac. is not fun. I'm sorry.
Would I listen again?
Probably
Posted by cwew at 9:51 PM