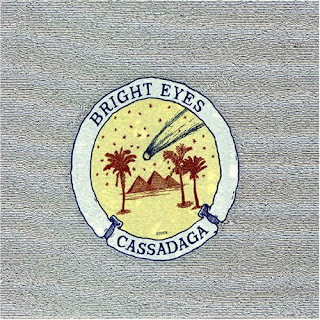 Why I Chose It
I like that song "First day of my life"from "I'm wide Awake, It's Morning". But I figure Conor Oberest probably has some more things to say, so I'm just going to jump into this one. I hope it's not too boring and another lyric heavy CD, thought I have a feeling it is.
Live Blog
Clairaudients (Kill Or Be Killed) - Long weird intro. Impending doooom. "Don't give up hope. Cassadanga is just a premonition of where you're going". It's got a western feel to it. Like a sad country song. "It's kill or be killed". Spoken word outro.
Four Winds - Straight folk band. Like the intro. The girl's harmonizing voice is nice. The violin is pretty superb in the bridge. Oh man, I like the Yeats reference. "sum of man, slouching towards bethlehem". It's pretty good.
If The Brakeman Turns My Way - Oh man. This is sad. He's not very happy. The organ in the background is cool around 1:36. God. Too much meaning. This feels like a song from the south. Like Louisiana.
Hot Knives - Overdriven guitar intro, kinda cool. Wow, Conner, you're a pretty sad guy. "I've been used, I've been fucked. So what?". Use of orchestra around 2:40 is interesting. Like the outro too.
Make a Plan To Love Me - Okay. Worst name ever. This...is...too much. It's...way cheesy. It's not as bad  as I would think. But it sounds like I'm watching Cinderella. And I'm in some really happy scene. It's almost obnoxious.
Soul Singer In A Session Band - First line is the name of the song? What does that say about the song? Desperate? He uses a lots of metaphors. And I can't tell if they mean anything. Or if he's just writing nonsense. Maybe it's all suppose to mean something and I'm just too dense to get it. I don't know. The instrumentation still has a very southern feel to it.
Classic Cars - Still sounds like I'm stuck between two houses on the swamp.  Except when he says "if I get outta California". Strong organ."Saying, "Everything is a cycle, you’ve got to let it come to youAnd when it does, you will know what to do"Without even knowing I guess I took her advice. Painted her front door it seemed a suitable goodbye. It’s not that often but I think of her sometimes. Just something quaint, a couple ships in the night""
Middleman- This is pretty good instrumentation. I think this is a fiddle. I can't be sure. I like the vocal harmony during the chorus. The whole thing has a good rhythm to it.  One of the better tracks here. Changed the direction of the CD a little. Like it.
Cleanse Song - Oh. That happened. It was happy.

No One Would Riot For Less - Slow. Liked the choir vocal backing. Very depressing lyrics. The world is ending and I just want you. It's almost touching.
Coat Check Dream Song - Bongos? I guess it's about the end of the world. I'm getting lost here. I'm starting to get bored of the CD. Very odd song. Weird metaphors. I can't process them all in one sitting so quickly. It's difficult.
I Must Belong Somewhere - This starts like a country song. I don't know. It's saying to leave things aside. Kinda feels like the album is ending. Hopeful ending. I like it. Getting distracted.
Lime Tree - Real slow ending. It's....nice. Harmonizing with some girl. It sounds good. And it's sad. Conner Oberst is sad. Very sad.
Write Up
Well. Honestly. I don't listen to a lot of Indie music. It's lost on me for the most part. I don't have the right mindset I guess. It's rewarding to decode and figure out what he means, I suppose. Like Poetry. Only that's a lot of work. And I want my music to be fun. Where I can sing along. I like it to excite me. This music doesn't excite me.
That being said, it was a good CD. He's a very good writer and the lyrics he writes are usually very personal and intricate. They use clever metaphors to better explain his meaning. I get it. The instruments on the album are extremely varied as well. He uses all kinds of strings and percussion to give his music a very atmospheric feel to it. Most of them come off sounding like they were from the south of the US. Some change it up. But what I was not expecting is that he has much more of a band than I expected from just his single "First Day of my Life". I expect that if I listen to this CD more, I would understand more. I would take his songs more personally and I would come to appreciate the deep tapestry he has weaved here. However, this isn't a review. It's a look into my initial listening to the CD. Deeper than just first impressions I hope...
Would I Listen Again?
I don't know. Maybe when I grow up
Posted by cwew at 11:14 PM